Cost of Bitcoin Mining – How much it cost to mine 1 Bitcoin?

Looking to mine Bitcoin in your Country? Give it a second thought as perhaps you aren’t well aware of the Bitcoin Mining Cost!

Not every country has the same mining costs of a Bitcoin and Bitcoin Mining Cost varies too drastically with different countries. So, if you are thinking about mining and generating profits with the mining process, you need to do a deep research over the whole process, its costs and benefits. The world’s most favorite Cryptocurrency, Bitcoin is the favorite for the miners and people all around the world are involved in its mining and many of people are looking for the ways to do so.

Not going deep in the process of Bitcoin mining, we will just limit the whole article, on how much it cost to mine a Bitcoin in various countries. However, before going deep into our article topic, let’s give you a brief insight on what actually is the Bitcoin mining:

What is Bitcoin Mining?

Bitcoin Mining is the process through which new Bitcoins are mined. Also, it’s the process through which transactions are verified and added to the public ledger more commonly known as blockchain. Any person having internet and suitable hardware can do the task of Bitcoin mining. What’s the process involved is the compilation of recent transactions into blocks and solving a computational difficult puzzle, which upon successfully done, the person is rewarded. The person who is involved in the mining process is rewarded with the transaction fee associated with the transactions, which are compiled along with newly released Bitcoins.

Cost of Bitcoin Mining in your Country

Elitefixtures.com conducted a research and based on that research, we are now able to calculate ‘what is the actual Bitcoin Mining Cost in each country?’. As previously said, the mining cost differs based on several factors, prominent among them are electricity cost and hardware costs. The website elitefixtures conducted a research in around 115 countries with the inputs taking as average electricity costs as taken by the governments of each country and considering that total time it takes to mine a single BTC during the time of January 2018.

Based on it, the results reflected quite an enormous variation in Bitcoin mining cost. Here’s the take from the research:

Towards the lower side, we can count in countries like Belarus, Ethopia, Kahakhstan, Kuwait, Myanmar, Surinam, T & T, Ukraine & Uzbekistan, whose mining costs vary from $ 1700 to $3000.

Lying at the higher side of Bitcoin Mining Cost, the countries where the mining process takes a lot of money, the countries like Bahrain, Belgium, Cook Islands, Denmark, Kiribati, Niue, Western Samoa, Vanuatu, Tuvalu, Turks and Caicos Islands and Solomon Islands, whose pricing for mining each Bitcoin generally varies at around $12k to $16k.

Here’s the chart for you. Take a look: 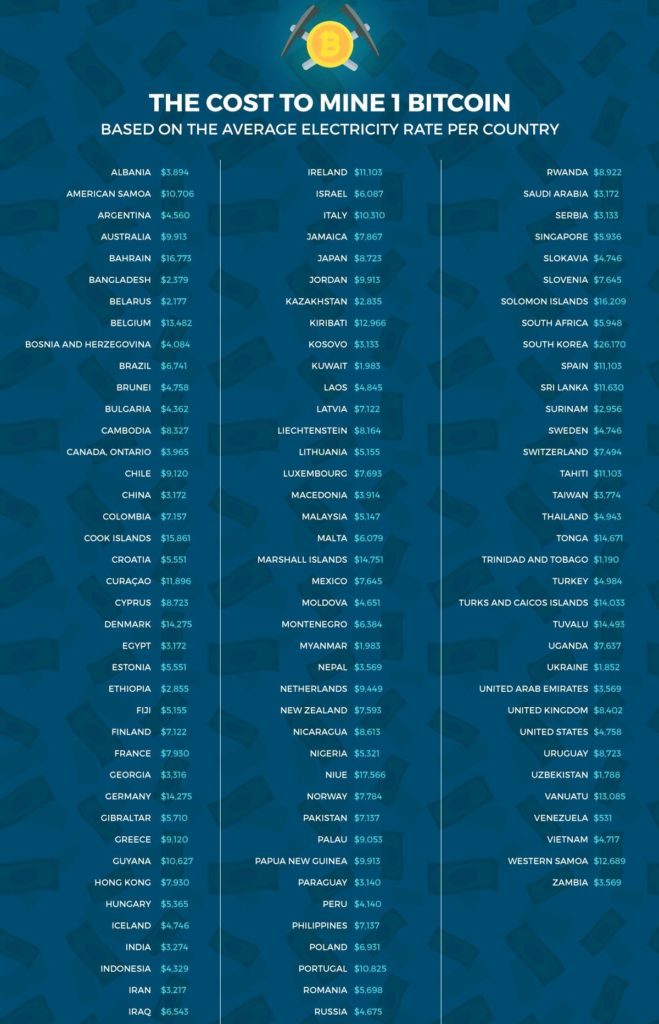 Which is the costliest and cheapest place considering Cost of Bitcoin Mining?

As per research, the Costliest place for Bitcoin Mining Cost is South Korea, with the average pricing for each Bitcoin mining being estimated at around $26,170. While, the cheapest place in doing the same is Venezuela with the pricing at around $531.

So, if you are residing in Venezuela, it’s a great opportunity to mine BTC and each huge profit, with each BTC you mine. At the current rate, which is around $6400, you can have a profit of around $5900, if you are in Venezuela and successfully mined one BTC. While, for South Koreans, it’s better if you focus on buying Bitcoins, isn’t it?

Thoughts over the written article on Bitcoin Mining Cost? Let us know! Comment below!